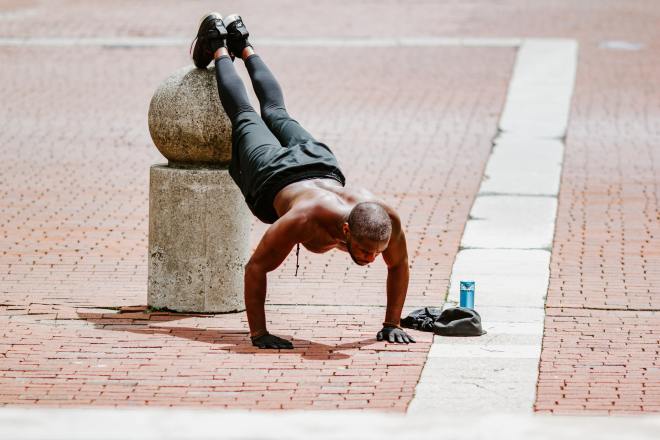 Summer now is getting closer… so why not talk about a one-minute workout? And yes, you did read that correctly… one minute workout. Through the great James Clear, I found a new book, The One Minute Workout, written by Martin Gibala, a professor at McMaster University. He claims to have found a way to get fit that is “smarter, faster, and shorter”. Yet the idea of a “one minute workout” probably sounds completely ridiculous to you (it does to me, as well!).

As with most things, the devil is in the details, and there’s actually some science behind the idea. It’s just that the entire workout does not take one minute, but something closer to ten. The minute workout refers to the 60-seconds of really intense exercise that is embedded within those ten minutes. This type of training is actually one of my favourite ones, together with weight lifting (which, contrary to popular belief, does not have to lead to increases in body size if you don’t want it to, and it is actually a rather effective tool to assist weight loss when properly used – but this is a topic for another Newsletter!). It’s called HIIT (High-Intensity Interval Training) [you can learn more about it here], and the typical way to present it can be summarized with the results of one of Prof. Gibala’s studies: 10 minutes of HIIT, three times per week, delivered many of the same benefits as 50 minutes, three times a week, of traditional cardio.

And yes, this time, you did read that right! 😉

After warming up for two minutes, the participants pedaled fast for three 20-second intervals. Each interval was followed by two minutes of slow pedaling. The workout finished with a three-minute cool-down.

From start to finish, the workout lasted 10 minutes. Only 60 seconds of that time was spent working hard (which is where the title of The One Minute Workout comes from).

Gibala then asked the study participants to rate how hard they were working on a 20-point scale (where 20 is maximum exertion). They rated it 15 out of 20. In other words, the intervals were hard. But they weren’t a maximum “all out” sprint. By the end of the three-month study, subjects in the continuous group had ridden for 27 hours. However, the interval group spent a little over five hours on the bike. So, despite a five-fold lower time commitment, various measures of cardiometabolic health improved to a similar extent in both the HIIT and steady-state groups.

– Insulin sensitivity, a marker of blood sugar control, improved to a similar extent in both groups.

“Most people cite ‘lack of time’ as the main reason for not being active,” says Gibala. “Our study shows that an interval-based approach can be more efficient. You can get health and fitness benefits comparable to the traditional approach, in less time.”

But now you might be thinking, “Sure Kike, but let’s stop pretending that I’m reading this looking for muscle mitochrondrial content improvements – what about weight loss?”

In fact, the men in the study lost a small amount of fat during the 12-week study. But it wasn’t a lot, averaging around 2 kilograms in both groups.

And so, we can interpret this in two ways: You could say that cardio, in the absence of a good diet, doesn’t do much for fat loss. Which is what most other studies on the subject show. Or, you could say that 10 minutes of interval training is just as effective for fat loss as 45 minutes of traditional cardio. (Which of course is the selling point of the book) In general, exercise doesn’t make a big contribution to fat loss. You’re far better off making changes to your diet than trying to burn a lot of calories with exercise –as we covered previously in another Newsletter: exercise can be a great tool to aid fat loss, but let me repeat it one more time: you can’t outrun a bad diet!–. It’s also worth pointing out that the men taking part in the study were unfit and overweight (which, in case you know a little bit about sports peformance, helps explain why their VO2 peak improved so quickly). People will gain more or less from HIIT depending on their starting level of fitness. If you’re already fit and want to get even fitter, you’re not going to see such rapid gains in aerobic conditioning in just three months.

And, anyway, none of this means that you should ditch regular cardio and replace it all with HIIT. (Although I personally never do cardio, except whatever volleyball/paddle tennis game I play with friends… which will bring me back to weight lifting as a weight control tool in a future newsletter!)

“If you are an elite athlete, then obviously incorporating both endurance and interval training into an overall program maximizes performance,” Gibala told The New York Times. “But if you are someone, like me, who just wants to boost health and fitness and you don’t have 45 minutes or an hour to work out, our data show that you can get big benefits from even a single minute of intense exercise.” Nor does it mean that HIIT is “better” than regular cardio. It’s just more time efficient. Think of it as another option on your exercise menu. HIIT by itself isn’t going to produce radical changes in body composition. For that, you’re going to need to lift some weights and get your diet in order. But, as far as improving (or even just maintaining) your health and fitness is concerned, 10 minutes of interval training three times a week will get the job done.

So hey, at least now you know that time is yet another excuse that you can take off the list of why you don’t do enough exercise.