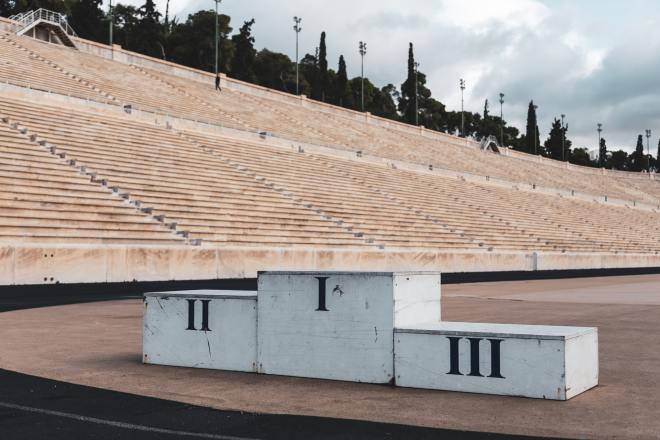 Today, we draw our newsletter from Mark Manson, the writer-blogger we already met in September (still recommend his The art of not giving a f*ck book). What follows is an edited excerpt of a great post discussing “the disease of more”, and how our brains trick us into believing that nothing is ever enough. Definitely a thought-provoking topic.

There’s a famous concept in sports known as the “Disease of More.” It was originally coined by Pat Riley, a hall of fame coach who has led six teams to NBA championships (and won one as a player himself). Riley said that the Disease of More explains why teams who win championships are often ultimately dethroned, not by other, better teams, but by forces from within the organization itself.

Riley said the 1980 Lakers didn’t get back to the finals the next year because everyone became too focused on themselves. The players, like most people, want more. At first, that “more” was winning the championship. But once players have that championship, it’s no longer enough. The “more” becomes other things — more money, more TV commercials, more playing time, more media attention, etc. As a result, what was once a cohesive group of hardworking men begins to fray. Players feel entitled to ignore the small, unsexy tasks that actually win championships, believing that they’ve earned the right to not do it anymore. And as a result, what was the most talented team, ends up failing.

(…) One of the first things psychologists did to study happiness was a simple survey. They took large groups of people and gave them pagers (remember, this was the 80s and 90s), and whenever the pager went off, each person was to stop and write down two things: 1) On a scale from 1-10, how happy are you at this moment? 2) What has been going on in your life to cause these feelings?

They collected thousands of ratings from hundreds of people from all walks of life. And what they discovered was both surprising, and actually, incredibly boring.

Pretty much everybody wrote ‘7,’ like, all the time, no matter what.

At the grocery store buying milk. Seven. Attending my son’s baseball game. Seven. Talking to my boss about making a big sale to a client. Seven. Even when catastrophic stuff did happen — mom got cancer, missed a mortgage payment on the house, junior lost an arm in a freak bowling accident — happiness levels would dip to the 2-5 range for a short period, and then, after a certain amount of time, promptly return to seven. This was true for extremely positive events as well. Lottery winners, dream vacations, marriages, people’s ratings would shoot up for a short period of time, and then, predictably, settle back in around seven.

This fascinated psychologists. Nobody is fully happy all the time. But similarly, nobody is fully unhappy all the time either. It seems that humans, regardless of our external circumstances, live in a constant state of mild-but-not-fully-satisfying happiness. Put another way, things are pretty much always fine. But they could also always be better.

But this constant ‘seven’ that we’re all more or less always coming back to, it plays a little trick on us. And it’s a trick that we all fall for over and over again.

The trick is that our brain tells us, “You know, if I could just have a little bit more, I’d finally get to 10 and stay there.” Most of us live most of our lives this way. Constantly chasing our imagined 10. You think to be happier, you need to get a new job, so you get a new job. And then a few months later, you feel like you’d be happier if you had a new house. So you get a new house. And then a few months later, it’s an awesome beach vacation, so you go on an awesome beach vacation, and… well, you get the point.

(…) Does this mean that there’s no point in doing anything? No, it means that we need to be motivated in life by something more than our own happiness. It means that we have to be driven by something greater than ourselves.
Otherwise, you will simply run and run towards some vision of your own glory and improvement, towards your perfect 10, all the while feeling as though you’re in the same place. Or worse, like Riley’s championship teams, slowly undermining what got you there to begin with.

(…) The funny thing about self-improvement for the sake of self-improvement is that it doesn’t inherently mean anything. It’s just a glorified hobby. It’s something to keep you occupied and to enthusiastically discuss with other people who have the same hobby. It took me a long time to accept the fact that just because something can be improved in my life, does not mean that it should be improved in my life.

The improvement is not the problem, it’s the WHY that’s motivating the improvement that matters. When one compulsively looks to improve oneself, without any greater cause or reason driving it other than self-aggrandizement, it leads to a life of immense self-preoccupation, a light and beneficent form of narcissism where one’s constant attention and focus is on oneself. And ironically, this will probably make your life worse off. I think many people see life in terms of linear growth and improvement. This is probably only true when you’re young. As a kid, your knowledge and understanding of the world grow massively each year. As a young adult, your opportunities and skills grow rapidly as well. But once you hit adulthood, once you’re established and have developed expertise in certain areas, because you’ve already invested so much time and mental energy into your skills and assets, life is no longer simply a question of improvement, but rather of trade-off.

Be careful with the drive to improve for the sake of improvement, the desire for more for no other reason than it’s more. Be careful adopting new dreams and goals that could harm the success and happiness you’ve already built for yourself today. Or as the cliche goes, be careful what you wish for, because you just might get it.

Life is not a checklist. It’s not a mountain to scale. It’s not golf game or a beer commercial or whatever you might want to insert here.

Life is a game of tradeoffs. And you must eventually choose what you’re willing to trade based on what you value. And if you’re not careful with your values, if you are willing to trade things away for the sake of another temporary trip to your own personal psychological 10, then chances are, at some point, you’ll realize you f*ed things up.