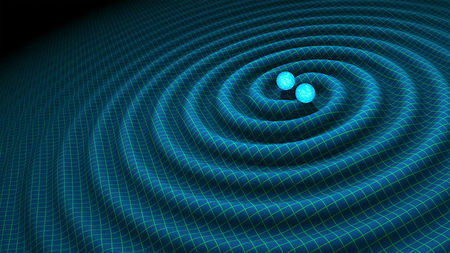 This is it – we have reached the last installment of the series ‘Black holes, collide!’, and we will finally learn, as the grand finale (considering “grand” the nerdiest thing of the year), what happens when two of these monsters collide… and why the first experimental detection of such an event, in 2015, ended up becoming the 2017 Nobel Prize in Physics.

Summarizing what we learned before:

Energy and spacetime are intertwined: energy curves spacetime, and spacetime dictates how energy is to move. Light bends around very massive objects1 just like a meteor curves its path around a planet (it just takes much higher masses for the effect to be obvious for light!).

Black holes consist of a central so-called singularity, a point of (apparently) infinite density that contains all the mass of the black hole, surrounded by the event horizon, the shell that marks the point of no return: time stands still at the event horizon, and beyond it nothing (not even light –that’s why we see it black) can escape from being eventually absorbed by the singularity.

So, now that we can picture a couple of these things orbiting each other and trying to absorb more matter, the question arises: how can two of them collide? How do we see them collide? In fact, how can we see one black hole (let’s not get too ambitious for now) if it emits no light2 and it cannot be seen from Earth?

To see a black hole, there are two possible answers: either we see them through their gravitational effects on surrounding matter (that is, we infer there must be a black hole there because all observations indicate there is an invisible and rather massive object right there disturbing everyone else), or we see them through the matter that is falling inside (it might form a disk that swirls around it that can get super-hot and start emitting X-rays, thus betraying the presence of the black hole).

However, detecting a pair of black holes is exceedingly difficult: given that detection relies on indirect methods, proving whether there are two black holes close together or just a big, lonely black hole is not easy at all. It turned out to be so difficult that the first direct evidence of such things existing2 actually came from a collision between two of them! But then again, if we cannot see them and we cannot distinguish a pair through traditional methods for detecting a black hole… how did we get evidence from such a collision in the first place?

If you remember, we said that energy curves spacetime. That is, if you picture a star and the spacetime around it, spacetime will be a bit curved around the star as opposed to a perfectly straight, empty spacetime. But now, think about this: what happens when this star moves? How does this spacetime curvature ‘move’ with the star? Or, more appropriately said, how do the curvature alterations brought by the moving mass propagate through spacetime?

The answer is that the curvature will change to reflect the new position of the moving star, adapting to the updated position as it moves. But this is not what happens always: under certain circumstances3, this moving mass will radiate a spacetime disturbance that will propagate through spacetime: the so-called gravitational waves that were the object of this year’s Nobel prize in Physics.

So, gravitational waves are “ripples” in spacetime curvature (“ripples” on the fabric of the universe!) generated by accelerating masses. They propagate outwards from the source at the speed of light, and they are one of the key ways in which Newton’s gravity is deeply flawed (it assumed that gravity propagates at infinite speed, such that any changes are instantaneously felt everywhere): if the Sun were to suddenly disappear, its gravitational influence would not suddenly disappear, but it would take about 8 minutes to do so – we would see the Sun disappear while its gravitational force was disappering as well.

These waves, however, are incredibly weak. This shouldn’t come as a surprise, given that the gravitational interaction is (by far) the weakest interaction in the universe. But it has a clear consequence: detecting them is incredibly hard, and we cannot detect any sources: we need a pair of white dwarfs, neutron stars, or black holes4.

Just so you understand exactly how feeble these waves are, let me quickly introduce you to LIGO, the experiment that managed to detect them for the first time: LIGO is made out of two different experimental facilities, apart by around 3,000 km, which contain similar experimental setups, in which 4 km of space between mirrors is the “measuring stick”. LIGO can detect, within those 4 km, something ten thousand times smaller than the radius of (I’m serious) a proton. This is something like measuring the distance to one of our neighboring stars with the precision of a human hair. And the machine requires both facilities, so far apart, because, as you can imagine, even a train passing some kilometers away from the experiment will certainly cause vibrations much, much bigger than that. So they “contrast” everything they measure against each other to eliminate from the measurements anything that might have its origin within the Earth.

This was how the first four pairs of colliding black holes were detected: LIGO managed to pinpoint, against all odds, the waves arising from such an event (theoretically predicted and described for the first time almost a century ago)! And unfortunately, the collision in itself is not so interesting5: once they are close enough they merge into one, and this newly formed black hole then settles into a stable form by emitting all excess energy as more gravitational waves.

But August 2017 would bring a fifth pair… which would turn out not to be a pair of black holes, but a pair of neutron stars close to colliding and merging. Why would this be interesting? Well, if you think a little bit about it, this is truly the first time that humanity gazed into the stars not only through light, but also through gravity – we saw and we heard the collision. Not bad for rather intelligent apes that barely 2,000 years ago were looking rather puzzled to the Sun wondering who or what it was…

…and certainly one of those magic moments in which one can imagine a young Albert Einstein, alone, working with pencil and paper, realizing what the implications of his nascent theory were – and then suddenly jump forward almost a hundred years (!) to imagine a billion dollar machine and thousands of scientists working together to achieve what everyone believed to be impossible.

If that’s not what standing on the shoulders of giants6 feels like, I don’t know what is.

This ends the last Newsletter of 2017. Hope you enjoyed it!

1 This is not some of these “you would see… if conditions were… but we cannot see it due to…” effects. Gravitational lensing is a (rare) astrophysical event that works just like you might think if mass truly curved the path of light (which it does):

Most of the time, this “massive object” is an entire galaxy and not a star (as we mentioned, it requires quite a big mass), but this interesting effects has some cool examples. One of the best is the so-called Einstein cross, a quasar (a supermassive black hole violently absorbing a disk of gas and emitting a huge amount of light) that is sitting behind another galaxy [the center is the galaxy, the quasar is the four blobs of light around]:

2 Pairs of stars, however, are incredibly common – about four fifths of the “points of light” you see on a clear night sky are actually so-called binary systems. These pairs of stars typically also have their own “solar systems” around them: imagine the beautiful twilight with two suns, just like in the movies!

3 These circumstances can be summarized (a bit technically) as follows: an object must be moving and accelerating, provided that the motion is not spherically (e.g., a expanding sphere) or rotationally symmetric (a spinning top). Since radiation implies energy being released, an uniformly moving body would not radiate any gravitational energy.

4 The densest objects in the universe are, in that order, white dwarfs (the remnant of a “standard star”), neutron stars (the remnant of quite a massive star), and black holes (the remnant of the biggest stars!). It takes super dense objects to detect these waves because they pack so much energy in such small distances, that the resulting curvature is “intense enough” to be detected once the ripples are emitted.

5 I kind of tricked you into reading four newsletters with a rather bad (scientifically speaking) excuse. But I hope you enjoyed the journey anyway – remember that the most important thing is to enjoy the journey rather than the destination itself. Cavafy wrote in his Ithaka poem:

[…] Keep Ithaka always in your mind.
Arriving there is what you are destined for.
But do not hurry the journey at all.
Better if it lasts for years,
so you are old by the time you reach the island,
wealthy with all you have gained on the way,
not expecting Ithaka to make you rich.

Ithaka gave you the marvelous journey.
Without her you would not have set out.
She has nothing left to give you now.

And if you find her poor, Ithaka won’t have fooled you.
Wise as you will have become, so full of experience,
you will have understood by then what these Ithakas mean.

6 A famous quote by Newton reflecting on scientific progress. Nietzsche didn’t quite like it, asserting instead that every once in a while a giant appears among men, pushing all of us with him, and each giant calling to his brother through the desolate intervals of time. Perhaps we need indeed some extraordinary humans to propel us forward, but it is the rest of us, the dwarfs, who must take on the responsibility of keeping the torch alive for the next giant.